Ever Given container ship is stuck at the Suez Canal and, in turn affecting global trade by blocking one of the busiest as well as essential waterways in the world.

Someone from this side of the world may wonder the reason international media are discussing a nondescript ship.  Imagine Ever Given as a giant truck that blocks both sides of a major highway connecting two major cities such that no vehicle can pass through the section of the road from either side. 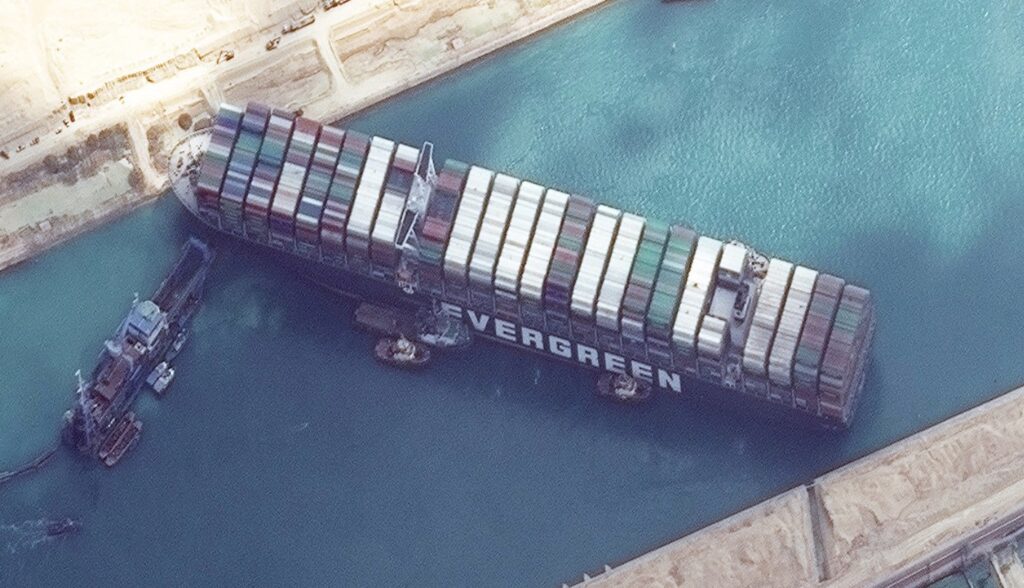 Current status of the Suez Canal

The Suez Canal Authority (SCA) has suspended all traffic while salvagers try to pull Ever Given back to sailing position and unblock the waterway. They have been trying several ways, including pulling nine tugboats, dredging below the hull, and excavating the point when its bow is stuck.

The size and weight of the 200,000 metric tons vessel are preventing the teams from making much progress.  Bernhard Schulte Ship Management, the ship’s technical manager, said they “might have to complement current efforts by removing containers, water and oil” to reduce weight. Some marine experts expect that a tide in the next few days might add 18 inches of depth to the canal’s waters and float the ship from the sand.

So far, four days after the ship got stuck, the dredgers have shifted over 27,000 cubic meters of sand which translates to a depth of about 18 meters. Unfortunately,  the ship only moved slightly and is therefore still wedged across the canal.  A combination of techniques may shorten the time it will take to float the ship and open the waterway.  Already, the Egyptian president has ordered offloading of come containers to lighten the ship. 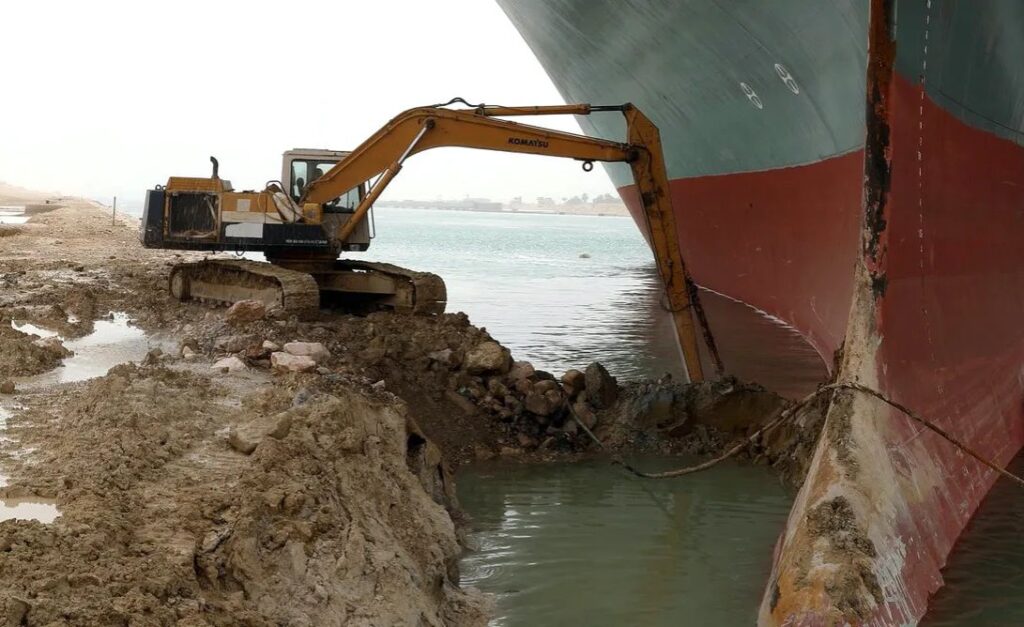 A prolonged closure will cause losses for ships blocked at the canal, while those that reroute will incur additional expenses and time to dock at their destinations. Experts also estimate it will take around a week to clear the backlog of more than 300 ships waiting at the Suez Canal.

Details of the Ever Given ship

The container ship, operated by Evergreen Marine, is 400 meters long, i.e., four football pitches’ length, and weighs 200,000 tons.  The width of the ship is 58.8 Meters, thus making it difficult to pull and refloat it. It is also extremely heavy, weighing 20 times more than Eiffel Tower in France.

Japanese company Shoei Kisen Kisha Ltd owns the vessel but registered it at the Port of Panama, while the operator is Evergreen, the Taiwanese shipping giant.  The vessel began sailing in 2018. It got stuck in Suez when sailing from china to the Netherlands when winds forced it to drift from the course and its hull stuck in the canal’s bed. The ship’s length blocks the entire canal, leaving no space for any ship to pass in either direction.

Suez Canal is an artificial canal in Egypt separating Africa and Asia. It connects the Mediterranean to the Red Sea, running for 193 kilometers (120 miles). The distance is the shortest route between Europe and lands around the Western Pacific and Indian oceans, making it one of the busiest shipping lanes.  Suez is the longest canal without locks that connect water bodies at different altitudes. It is the reason for a shorter transit time that takes just hours since no locks interrupt maritime traffic.

How deep is the Suez Canal?

The waters at Suez Canal are 24 meters deep, an increase from 8 meters during building. Seven dredging exercises have increased depth to the current measurement.

How long does it take to sail through the Suez Canal?

A ship, according to Suez Canal Authority, takes 12 to 16 hours to cross the waterway.

What is the daily traffic?

Around 19,000 vessels, including cargo and passenger ships, together with small boats sailed through Suez Canal in 2020. It means about 50 water vessels a day. That includes 39 large cargo ships every day.

What is the Transit fee?

Who is in control of the Suez Canal?

Egypt controls the movement of ships and charges transit fees. State Corporation Suez Canal Authority operates and maintains the waterway.  It generates over $5.6 billion a year from transit fees.  However, a convention signed by major maritime powers declares that the canal’s waters should be open without hostility to all ships.

What is the estimated amount of annual trade?

Goods worth around $1tn (around 12% of global trade) pass through here every year.

What is the effect of the Suez maritime jam?

Suez Canal is essential since about 12 % of cargo in global trade passes through this 193km canal in Egypt connecting the Mediterranean and Red sea. It provides the shortest link between Europe and Asia. A ship that takes an alternate route must move to Africa’s Southern tip by sailing around the Cape of Good Hope. It takes two weeks longer than it takes to sail through Suez. This means the shipowner pays more for fuel and crew allowances while the goods onboard take longer to reach the destination. Suez Canal is the route through which approximately 30% of global container volume transits every day.

Ever Given, according to tracking data, has created “one of the worst shipping jams for years.” Since its grounding on March 23, 2021, the large container ships stuck on each canal’s end are 206.  Some are carrying raw materials for manufacturers, grain while others are ferrying oil and gas to different destinations. Lloyd estimates the blockage is delaying the movement of goods worth $400m and $9.6bn.

Fears are that a prolonged delay will impact production in industries at manufacturing giants like Germany as around 16% of chemical imports arrive through Suez Canal. It will also affect oil flows from Russia and Saudi Arabia, the two main exporters that use the channel for shipping Asia and Europe.