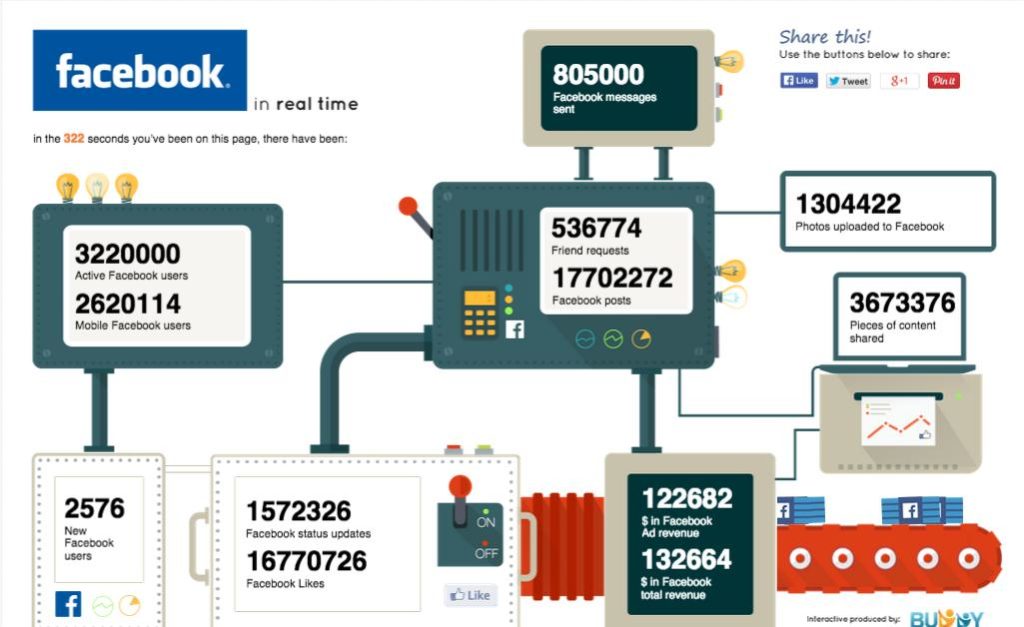 However, today Facebook is the largest social networking system in the world! If you were to ask most people you know or were to meet, they would say they are on Facebook.

Originally Facebook began as “Facemash” where you could compare two different faces and make comments about them.

Then there is the creator of Facebook, Mark Zuckerberg, who went from Harvard University student, to CEO of one of the richest companies in the world.

In May of 2012, Facebook went public selling shares of the company in an IPO/Initial Public Offering. The sale of shares raised over 16 billion dollars, making it the third largest IPO in the history of the United States.

At any given time this is how many Facebook users are online accessing their Facebook page and viewing posts. And from the looks of things, there are a lot of people actively using Facebook!

Mobile Users: Let us not forget that in this day and age, many Facebook users are accessing their Facebook page and viewing posts via their mobile, and using the Facebook app.

On average 79% of all active Facebook users are accessing Facebook via their mobile. If that doesn’t support an application, I am unsure what would.

On average, there are 486,183 users on Facebook, via their mobiles every minute!

This is how many people are just now signing-up for Facebook. Funny, I thought everyone already had signed-up, but apparently there still are those out there that are not Facebooked yet.

Here is where we see the power of the social network! In just a short period of time hundreds of thousands of messages are sent to other users.

Maybe you found a long lost school mate on Facebook and want to catch up on what’s been happening, you send a Friends Request to them.

This is also where the social network gets even more social. Locating old friends, connecting with those in your circle of friends, or your family in other parts of the country or world. You send a Friends Request and they can become part of your Facebook social group.

With so many people using Facebook, and new ones joining, you can imagine that there would be plenty of Friends Requests.

In just a short period of time thousands and thousands of people are changing their Facebook Status. This is where you state your status is single, married, in a relationship, etc.

I wonder how many are changing their status from Single to In a Relationship, or from Married to Single. We might be able to find some statistics on divorce and broken relationships from this.

I also wonder how many of those status updates go from single to in a relationship, and then back to single in just a short period of time??

In just a second, over 52,000 liked something on Facebook and let it be known.

Money talks, or in the example of Facebook, money talks loudly.

This means that Facebook’s total revenue is around $416 per second.

Want the world to see what you are having for a meal in a restaurant, take a photo on your mobile and upload it to Facebook. Then see if anyone gives it a “like”.

The ability to upload photos so everyone can view them, and the access your friends will have to view them is amazing.

I wonder how many of those were selfies?

Facebook in real time, the numbers are massive, and show that as people we are very social, and as social networks go, Facebook is number 1!

This infographic is provided by Buddy Loans.