The Stella Vie is a solar-powered car with the ability to carry five people across a 1000 KM distance while moving at an average speed of 69 km/h.

The solar car developed by a Dutch team from the Eindhoven University of Technology was the winner of the bi-annual World Solar Challenge. The solar car has a maximum speed of 125 km/h just like the earlier model, the Stella Lux.

Besides generating power for its needs, the Stella Vie solar-powered car produces excess power that it can feed back to the grid – a unique concept that won the team the first place. The solar car uses about 48 KWh to transport an average of 3.4 people per kilometer. And it generates most of this power as it moves. 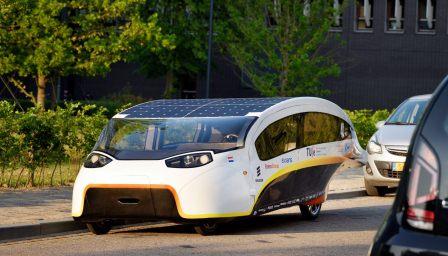 In fact, this car can generate more power than its requirements hence allowing people to feed the power to the grid when the car in the parking at home. As such, it provides both the clean means of transport as well as clean energy for other uses. According to the World Solar challenge events director, Chris Selwood, “This is the future of solar electric vehicles. When your car at the parking at home during the day, it will charge the batteries and supply any surplus energy back to the grid,”

During the challenge, the Nuna 9 solar car from Netherlands’s Nuon Solar Team was the best in terms of speed. The Nuna 9 solar-powered car was the first to cross the finish line of the over 1,860-mile (3,000-kilometre) Australian course that runs from Darwin to Adelaide. This becomes the third straight win for the Nuon Solar Team.

Why the Stella Vie solar-powered car got the first prize

The challenge looks at several factors when determining the overall winner. This includes design, innovation, energy efficiency and practicality.  The electricity generating car from Eindhoven is not the fastest solar-powered car, but is a great asset for families and the electric grid. With a smart charging system, the car will charge its batteries from the PVs when the demand from the grid is high and vice versa. In addition, the solar car will export any excess energy to the grid during its peak generation times.

The Stella Vie solar electric vehicle is probably one of the most efficient family cars. This is due to the fact that it generates its own power, and even a surplus to feed to the grid. In addition, solely relying on renewable energy means that it does not pollute or degrade the environment like the gasoline vehicles.

This and other similar ongoing projects by different manufacturers are likely to produce a future with zero emission transport.

The car body is made lightweight materials such as aluminum and carbon fiber. Further, the solar car has a curved roof and a tail boat shape, features that give it superior aerodynamics and better efficiency.

Due to its superior aerodynamics, design and low body weight, a fully charged Stella Vie solar-powered car has a range of 1000 kilometers during a relatively sunny day.