19.5W High Efficiency 2-USB-Port Solar Power Charger for Smartphones Tablets (SW-H195)
Africa is known some of the best tourism destinations in the world. From its fascinating mountains, breath taking coastlines, relaxing waterfalls and virgin hills, to their world dominating deserts.
In addition to being a tourist destination, Morocco has plenty of sunshine making it a suitable location to invest in solar energy. Morocco has already started harvesting the sun from the deserts and aims to generate 2000 megawatts of solar power by the year 2020.

Morocco is amongst the best countries in the world where solar energy is in plenty, having 3,000 hours per year of rich sunshine and about 3,600 hours in the desert area is attractive and economically viable. Morocco solar energy is enough for both local consumption and export to neighboring countries.
Another attractive factor of investing in the solar power in Morocco is its location, and ability to connect and supply power to Europe.
The Morocco’s project is one of the largest solar energy projects in the world and will cost an estimated $9 billion to build the five thermal solar stations. The project is headed by the Moroccan Agency for Solar Energy (MASEN), a public and private investment company and the whole solar power generation project is expected to account for 18% of Morocco’s generated electricity.
Aside from MASEN, the project will also be co-financed by the World Bank and the European Investment Bank. The NOORo1 thermo-solar plants will be the first among the five plants that will make Morocco a world-class sustainable power generator. Several companies were interested in the  funding, construction an operation of this pilot 500 megawatt solar plant in the southern town of Ouarzazate which will have both the Photovoltaic cells and concentrated Solar panels.
The work on the Ouarzazate solar power plant started in May 10, 2013, on a 700 hectare area in the Ghessate province in Ouarzazate Morocco. So far the project seems to be on schedule and will most likely be commissioned in 2015 as planned. 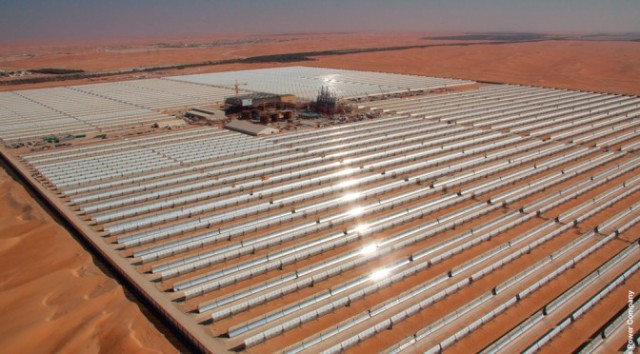 Other Solar Energy power plants in Africa
There are other ongoing and complete renewable energy projects in various African countries. With South Africa solar energy adoption seems to be ahead of the other counties in Africa. Some of the solar power plants in South Africa are;
KaXu Solar One
This is one of the 28 renewable solar energy plant projects that was constructed near Pofadder in the Southern Cape Province of South Africa last November 2012 and is scheduled for launch in 2015. It is a 100MW solar power plant that is part of target 17,800MW renewable energy target set by South Africa by 2030.
Khi Solar One
The International Finance Corporation, a member of the World Bank Group, is funding two solar power projects in South Africa, which includes KaXu Solar One and Khi Solar One, a 50MW project, at R1.25bn ($143m). The IFC has also arranged a loan of $264m for the two solar projects.
Letsatsi Solar Photovoltaic Plant
Located north-west of Bloemfontein a Free State of South Africa. It is a 75MW solar plant which together with Lesedi Solar plant are expected to produce about 150 GW-hours of electricity which can power about 50,000 homes.
Another interesting feature of the Letsatsi solar plant is that it could reduce the emission of carbon dioxide by 134,690t within a 10-year time frame along with the implementation of the clean development mechanism or CDM project. The said project is purposely for the activity and reduction of greenhouse gas emission.
For the Lesedi and Letsatsi Solar power plant project the estimated total investment amount is R5.15bn ($487m). The construction of Letsatsi started last February of 2013 and is scheduled for operation mid-year in 2014.
These solar power plant projects hold a promising future for the whole Africa and its people. They will provide more power and jobs. In addition, the renewable energy will ease over reliance on oil and gas power plants. With the convenient location of Morocco to the European countries, they will be able to export their excess power to Europe.