Skip to content
The Hyundai Kona Electric vehicles have set a record for the longest range per charge in the electric vehicle category with a 64 kWh battery pack.

The purpose of the trials, which lasted three days, was to overcome the 1000-km or 630-mile mark. The test involved three Kona Electric vehicles with an all-electric powertrain. The testing took place at the Lausitzring race track in northeastern Germany and took a total of about 35 hours.

According to reports, the Hyundai Electric vehicles participating in the tests were able to cover the distance of 1018.7, 1024.1, and 1026 km without recharging. Electricity consumption indicators were, respectively, 6.28, 6.25, and 6.24 kWh per 100 km of track. Each of the demonstrated results was a record for vehicles with a battery capacity of 64 kWh. 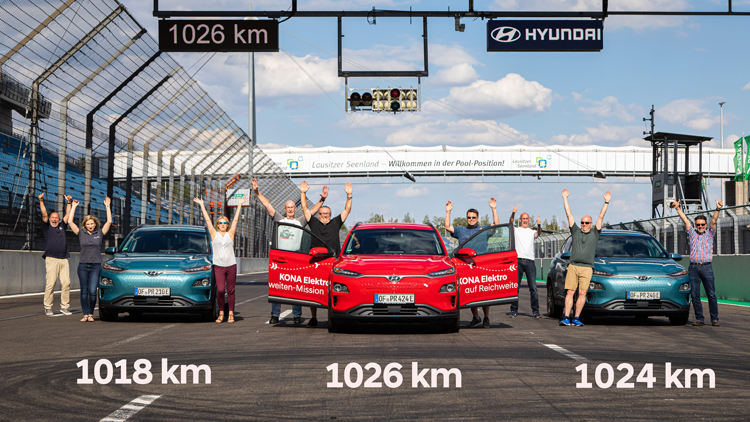 It is important to note that all test vehicles were standard factory-made models with no additional modifications or customization. They were fitted with standard 215 / 55R17 Nexen N Fera SU1 tires with low rolling resistance. The air conditioning and infotainment systems in each crossover remained off during the test — all power was used just to keep driving. At the same time, in accordance with the rules, the daytime running lights remained on all the time. The average speed was 29–31 km / h which is about 19 miles/h.

Basically, the above conditions are ideal, and most likely not possible to get such results in real life. Also, the vehicles were driven at slower speeds than what motorists would do on highways or good roads with less traffic.

Most often, the typical city streets and usual roads will not allow driving in the same conditions as the Lausitzring test track. However, motorists will still cover a reasonable distance with these models.  In practice, the Hyundai Kona Electric vehicle is rated at 415KM or 258 miles per charge, which is about 40-percent of the maximum speed under ideal conditions.